I have so many authors that I really like and Abbi Glines is one of them. Now until the Fallen Too Far series came out not too long ago I was more a fan of her Existence Series than all the other books she has written. But Fallen Too Far changed that, I became so infatuated with this series that while on my vacation I was constantly checking amazon for Never Too Far. While we all know now that my efforts were wasted and by the time I awoke the next morning which was around lunch (eastern time) I caved and bought it on iBooks just to have it for my plane ride home. I did not last that long, I packed in sonic speed and immediately started the book. I had reread Fallen Too Far the day before just to be refreshed and ready. I finished quickly into my exhaustingly long flight and then had so many hours to burn over the madness that was engulfing my brain. Please read Fallen Too Far before reading this.

Never Too Far by Abbi Glines

Blurb: The story that started with the New York Times Bestseller FALLEN TOO FAR continues…

Rush withheld a secret that had destroyed her world.

Her entire life had all been a lie.

Blaire couldn’t stop loving him but she knew she could never forgive him.

Now, she was back home and learning to live again. Moving on with life… until something happened to send her world spinning once again.

What do you do when the one person you can never trust again is the one that you need to trust so desperately?

You lie, hide, avoid, and pray that your sins never find you out.

Rating: 4 Stars
Price: $3.99
I am not sure what to say, I loved this book! I did not like the ending. It was abrupt and it left me questioning what just happened. I want to feel like the characters are going to be okay when I finish a book and I didn’t feel this way at the end of Never Too Far. I knew when I finished that Abbi Glines was going to write a story from Woods’ POV so I just assumed that in that book we would have some new info on Blaire and Rush but since then she has agreed to write a third book in their story so I am relieved. I would love to tell you all about the nonsense in this book but I do not want to ruin it. So much of this book boils down to something I don’t want to spoil. The book does have some face-palm moments (especially in the last 50 pages) and some twists that really make this interesting. There was so much in this book that I loved, Woods, Bethy and the steamy scenes between Rush and Blaire!!! The book was really great and you feel like we are getting a great HEA and the last 50 pages happen, I wanted to scream and throw my ipad out of the plane. Then in the last 10-20 pages everything is supposed to be perfect. It was not enough time to resolve the torture that was the last 30 pages. I did not for one second believe that it could all be wrapped in a pretty bow so quickly and I am still angry about it obviously! 🙂 But anyway, I loved it and because there will be another book I am going to be okay!

I have no clue when the next book will be out but her website says late summer 2013, even though I didn’t like her ending the story is still phenomenal and I am still addicted. 😉 And Woods’ story will be out in April 2013!!!! 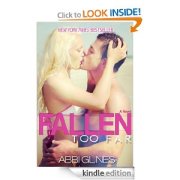 2 responses to “Book review: Never Too Far by Abbi Glines”

Abbi Glines Beautiful Bastard Beautiful Disaster Beautiful Stranger Beauty From Pain Beneath This Man Bluegrass Brothers Chasing Beautiful Christina Lauren Colleen Hoover Collide Come Away With Me Date Me Dead Letter Office Dirty Red Driven Effortless Existence Fallen Too Far Fall from Grace Fifty Shades of Grey Fight With Me Girls Love Travis Walker Hopeless Hunger Games Independence Into the Dark Jillian Dodd Kiss Me Legacy Collection Love and other perisable items Mad World Metamorphosis Neighbor from Hell Never Too Far Opal Play With Me Point of Retreat reasons i fell for the funny fat friend Reason To Breathe Reckless Rock With Me Ruining Me Ruining You Rule S.A. Price S.C. Stephens Saving Grace Sea of Tranquility Sins and Needles Slammed Stalk Me Suicide Note Tempting the Player Ten Tiny Breaths That Baby That Boy That Wedding The Coincidence of Callie and Kayden The Edge of Always The Edge of Never The Keatyn Chronicles The Stillness of You This Is Forever This Man Thoughtless Twilight Twisted Perfection Up In Flames Up to Me Vain Wait For You Walking Disaster Wallbanger With Me In Seattle