I have been off the grid while reading Date Me by Jillian Dodd. The review will not be posted until April 20th due to the exciting news that we are participating in her Date Me release blog tour. More info will be posted later. But on a similar topic, Suicide Note by Teresa Mummert was read while on vacation and I was going to post the review on the release day which was supposed to be yesterday but yay it was released early. 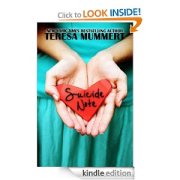 Blurb: Everything happens for a reason.
From New York Times and USA Today bestselling author Teresa Mummert. A soldier returning for mid-tour leave decides to stay with a cousin in Maine, after his fiancé leaves him for someone else while he is away at war. His cousin is going through his own devastation and is struggling to pick up the pieces and move on with his family. As they try to help each other through the pain, Shane’s path crosses Jenn’s and he soon learns that everything happens for a reason.
This novel does not contain any acts of suicide and has a HEA.

Rating: 5 Stars
Price: $2.99
So Teresa is one of my favorite authors right now. I quickly devour everything she writes and will continue to do so. I was aware that based on the title this book may have a heavier note to it which Teresa says that no one commits suicide and there is a HEA. So I immediately started reading it when I got my ARC. This is a story of 2 people who were destined to have a life together and fates way of putting them in each others lives/paths. I completely fell in love with Jenn and Shane they are both amazing people who have both experienced similar heartache. Both were engaged to people who left them for unacceptable alternatives, karmas a b**ch. I really enjoyed the diary style writing, it allowed ease of transitions between POVs and timelines. The only downside I found to this was that I felt like I wanted more details about their interactions. For example, they are going on an outing to brunch and to the movie. It starts with his POV convincing her to go to brunch, they leave and then it changes to her POV and they are now getting to the movie. There was nothing about the brunch which would have been a fantastic scene. That being said I still found that I fell in love with these characters and felt what they felt every step of the way. The secondary characters were so well-developed that you find yourself invested in their lives as well. I love Jake and May and the way they took Jenn under their wing! The military aspect was done so wonderfully, I love military wives for all their devotion to their men. She did not disparage or negatively view the character that left Shane but she did make sure to have a character that could hold strong and survive it. Teresa wrapped this book up with a pretty little bow. There is a surprise my brain didn’t ever see coming and I loved it. This was just a beautiful story about life and love. You guys know by now that I love true to life stories and this is the epitome of that!

One response to “Book Review: Suicide Note by Teresa Mummert”

Abbi Glines Beautiful Bastard Beautiful Disaster Beautiful Stranger Beauty From Pain Beneath This Man Bluegrass Brothers Chasing Beautiful Christina Lauren Colleen Hoover Collide Come Away With Me Date Me Dead Letter Office Dirty Red Driven Effortless Existence Fallen Too Far Fall from Grace Fifty Shades of Grey Fight With Me Girls Love Travis Walker Hopeless Hunger Games Independence Into the Dark Jillian Dodd Kiss Me Legacy Collection Love and other perisable items Mad World Metamorphosis Neighbor from Hell Never Too Far Opal Play With Me Point of Retreat reasons i fell for the funny fat friend Reason To Breathe Reckless Rock With Me Ruining Me Ruining You Rule S.A. Price S.C. Stephens Saving Grace Sea of Tranquility Sins and Needles Slammed Stalk Me Suicide Note Tempting the Player Ten Tiny Breaths That Baby That Boy That Wedding The Coincidence of Callie and Kayden The Edge of Always The Edge of Never The Keatyn Chronicles The Stillness of You This Is Forever This Man Thoughtless Twilight Twisted Perfection Up In Flames Up to Me Vain Wait For You Walking Disaster Wallbanger With Me In Seattle